Pet of the Month for November 2020

November 18, 2020 admin Pets of the Month No comments yet 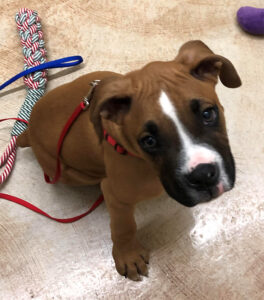 Diesel is a handsome Boxer who we have been seeing since he was just a puppy! We recently saw Diesel to have a growth removed from his paw. Growths are very common for Boxers and they can even appear when they’re puppies! Once removed, we have the ability to send the growth off to a lab to be tested to determine whether or not it is benign or malignant. We sent off Diesel’s growth which ended up being benign! Dr. Buntain added some staples in place and then placed a bandage on his paw to help the incision site recover. After a certain amount of time, we were able to remove Diesel’s bandage and he had healed beautifully! Diesel loves hanging out with his brothers Boomer and Jarvis! We love that we have been able to watch them grow up from being just 8 weeks old to the adorable 1 year olds they are!