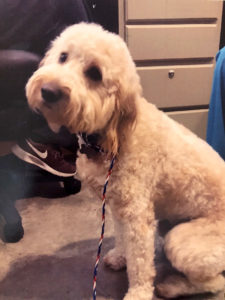 Last month, we had the honor of meeting an extremely happy Goldendoodle named Gus! Gus came to us in mid-January due to limping. The doctor examined him and it appeared to be his left forelimb that was causing him some trouble. We put sweet Gus on the anti-inflammatory to see if that would ease the pain and resolve his limping. A couple of days after his appointment, his mom decided to have him spend the day with us to monitor Gus and let him have the rest he needed, since he LOVED playing around with his sibling, Holt! While Gus spent the day hanging out with us, we took some radiographs of his leg to see what the underlying issue was. We discovered Gus had a case of elbow dysplasia, meaning the cartilage lining of his elbow joint had not developed properly. This can cause abnormal development also known as dysplasia. So, Dr. Buntain referred Gus to an orthopedic specialist who would be able to operate and repair his elbow. Gus visited the specialist for his surgery! The surgery was a success and Gus has been staying with us while he recovers! We love getting to see his happy face and wagging tail every morning! Gus is recovering very well and counting down the days until he can run wild with his sibling again!!